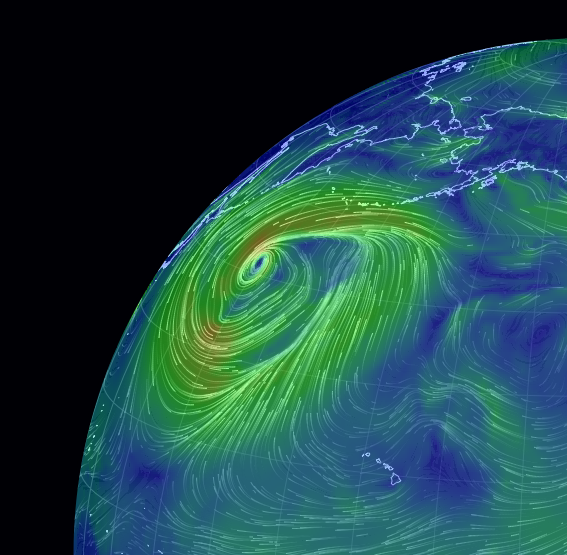 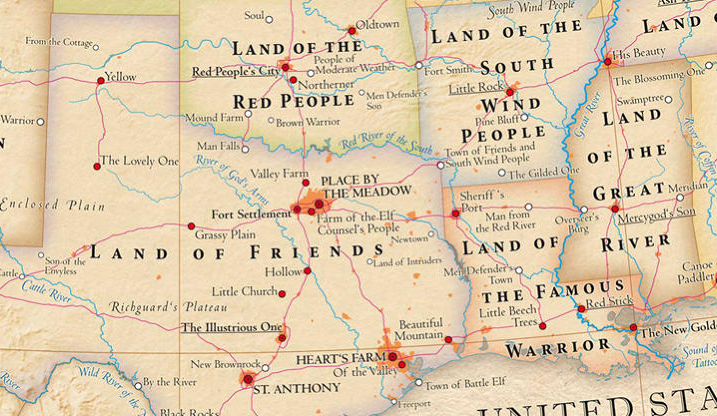 "The cape buffalo always looks at you like you owe him money."
Col. Jeff Cooper, USMC (Ret)

Lion sent flying by buffalo in South Africa; photo is a screen grab from video

First, let it be stated up front that no animals were harmed in the making of this video, except perhaps the ego of a young lion getting badly bruised, as suggested by Barcroft TV in its post.

Two young lions were stalking a buffalo in the Mjejane Reserve on the border of Kruger National Park in South Africa when one lion decided to pounce. After bringing its prey down, the lion thought it would be enjoying a fresh meal of buffalo. It thought wrong. Watch as a bull buffalo comes to the rescue to save its friend, sending the lion flying in this amazing wildlife video:

Ian Matheson, 52, and his son Oliver, 16, were on an early morning drive in Kruger Park when they noticed the lions stalking the African buffalo, a.k.a. a cape buffalo. They watched for 45 minutes until one lion finally brought the buffalo down, as the prey cried out for help. Soon, the cavalry arrived in the form of a bull buffalo, which launched the lion in the air. 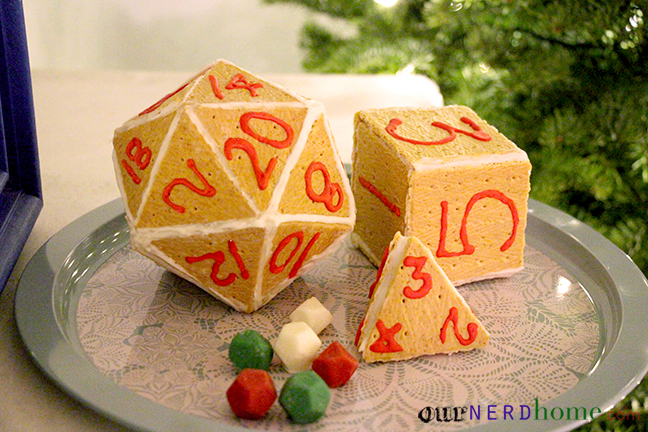 I have never in my life  made a gingerbread house, but it seemed fitting that my first one be shaped like a D20 (plus a bonus D4 and D6).

Okay, I realize this isn’t a “house”, but we weren’t really sure what else to call it. Plus it’s not actually gingerbread, it’s just graham crackers… so… “Gaming Dice Shaped Graham Cracker Structure”? That doesn’t sound as good. Anyway.

The Gingerbread D20 is a patience-trying project. Consider yourself warned. It is hard to the get the angles right, hard to get the shape to stay formed correctly, hard to get the icing to go on/stay straight, and hard to not eat while you’re making it. But after all of the frustration (and snacking), we kinda love it so wanted to share anyway. 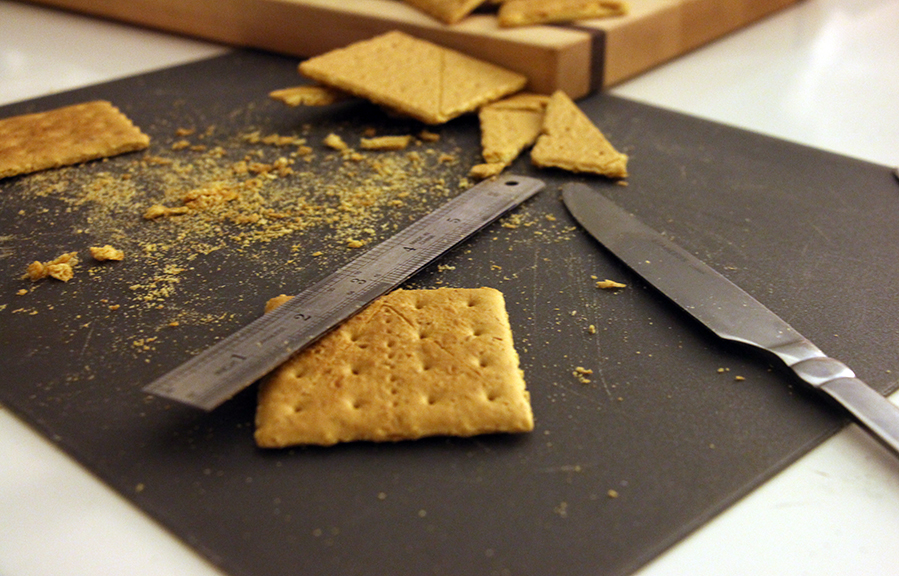 First get some graham crackers from your s’mores stash. Graham crackers are really easy to cut – you just use a butter knife (or other lightly serrated edge) to score the cracker about halfway through, then snap it. 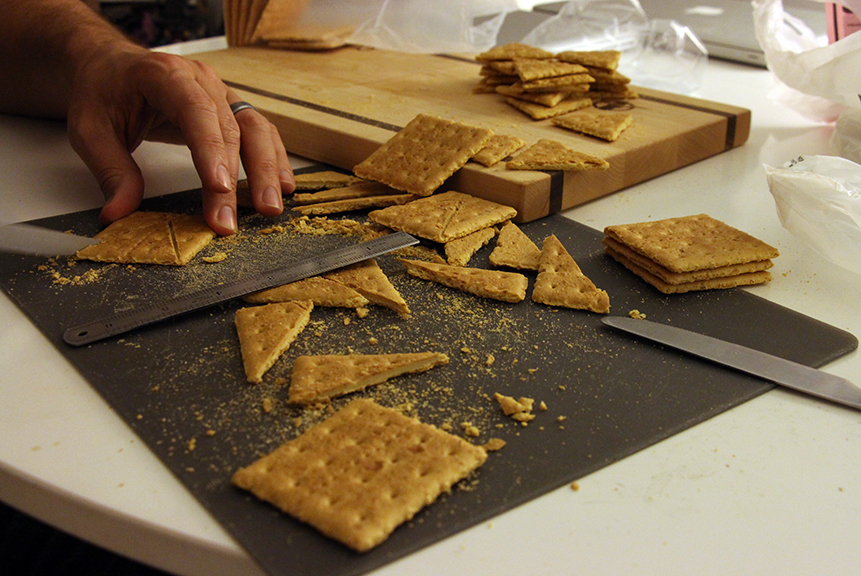 We used a ruler to measure each edge to the same length (2.5 inches) to make a perfect-ish triangle. Make a ton of them. At least 30, since a bunch won’t be quite right.

For the “glue” we used melted white chocolate Candy Melts. Yum. We melted the chocolate directly in ziploc bags, then cut a tiny corner of the bag off to pipe the chocolate. 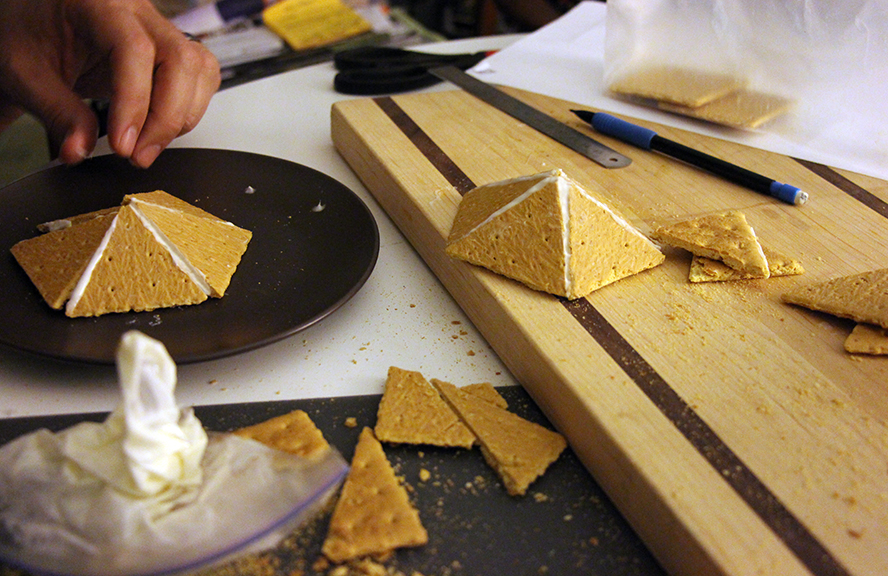 The easiest way that we figured out to do this is to create 3 “domes” of 5 triangles each. Cam found a bottle cap to balance the center points of the triangles on that was just about the right height. He assembled the dome, then piped the chocolate up each seam. BE PATIENT, and hold it in place for a couple of minutes until it starts to harden. After the chocolate hardened we tried to scrape off most of the stray chocolate to clean things up. 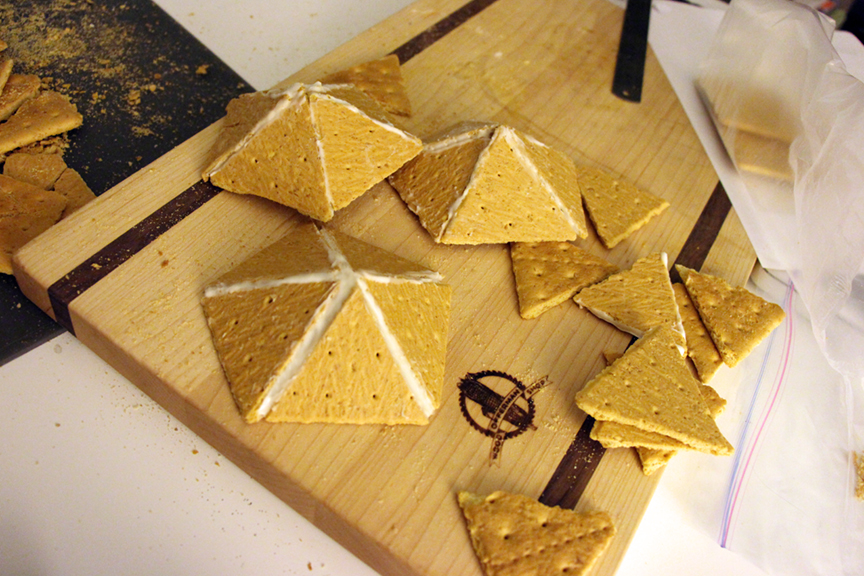 Repeat until you have all three domes. The next step is best done with 2 people, which is why we don’t have pics. I held the domes together (there will be a large opening on the top) while Cam piped them together from the inside. Then we held everything in place for what felt like forever until they hardened (probably 4 minutes). Next, we reinforced all of the outside seams again. Put it in your fridge to really make sure it’s stuck. Last construction step is to take your leftover triangles and cover the hole – once you’re at this step it will be clear what goes where by looking at a [real] D20.

We bought a red “Icing Writer” from Michael’s to fill in the numbers. Once the Gingerbread D20 was done, we used extra graham crackers and white chocolate to make a D6 and D4, which were MUCH easier.

You might also notice the little green/red/white dice hanging out with the gingerbread gaming dice. That’s a sneak peak for a post we have coming up next week… DIY chocolate dice! That is a quick, fun, instant-gratification project that you can make a giant bowl of for your geeky friends (or use for a DIY geek gift). 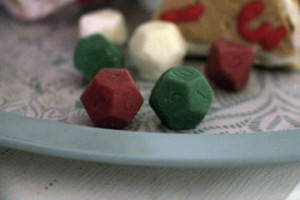 Suppose the Grand Canyon were man-made. It could have been formed (though it wasn’t) by agricultural or industrial erosion; the results of poor farming methods can look very similar — artificial badlands — if on a smaller scale. Would this hideous scar on the fair face of the earth still be a national park? Would anyone visit it other than groups of awed schoolchildren studying Environmental Destruction, absorbing the dreadful lesson of what can happen to a desert raped by human exploiters? Strip mining can produce spectacular and dramatic landscapes. W.H. Auden loved the lead-mining landscapes of Cornwall above all others; the evocative and aromatic hillsides of the Mediterranean, with their olives, sages, thyme, and dwarf conifers, are a result of centuries of deforestation, goat herding, and the building of roads and cities.

– Frederick Turner, “Cultivating the American Garden: Toward a Secular View of Nature,”Harper’s, August 1985

You need to watch the video to believe it. It will take a minute to load but it is well worth the wait. The video is below the article. This is what you get when liberal voters move to NH.

Who Is, “Ben Ghazi” And What Did He Do? — GraniteGrok

The Bakersfield legless lizard, (Anniella grinnelli), which today ranges from downtown Bakersfield in the southern San Joaquin Valley to the Carrizo Plain National Monument 30 miles to the west. The species has a purple belly and yellow sides. Photo by Alex Krohn.

California biologists have discovered four new species of reclusive legless lizards living in some of the most marginal habitat in the state: a vacant lot in downtown Bakersfield, among oil derricks in the lower San Joaquin Valley, on the margins of the Mojave desert, and at the end of one of the runways at LAX.

“This shows that there is a lot of undocumented biodiversity within California,” said Theodore Papenfuss, a reptile and amphibian expert, or herpetologist, with UC Berkeley’s Museum of Vertebrate Zoology, who discovered and identified the new species with James Parham of California State University, Fullerton. The discoveries raise the number of California legless lizard species from one to five. Legless lizards like this purple-bellied A. grinnelli lost their legs millions of years ago in order to burrow more quickly into loose soil and sand. These lizards differ from snakes in having eyelids, ear openings and a detachable tail. Photo by James Parham, CSU-Fullerton.

“These are animals that have existed in the San Joaquin Valley, separate from any other species, for millions of years, completely unknown,” said Parham, who obtained his doctorate from Berkeley and is now curator of paleontology at the John D. Cooper Archaeology and Paleontology Center. “If you want to preserve biodiversity, it is the really distinct species like these that you want to preserve.”

Papenfuss and Parham reported their discovery on Sept. 17 in the journal Breviora, a publication of the Museum of Comparative Zoology at Harvard University.

Legless lizards, represented by more than 200 species worldwide, are well-adapted to life in loose soil, Papenfuss said. Millions of years ago, lizards on five continents independently lost their limbs in order to burrow more quickly into sand or soil, wriggling like snakes. Some still have vestigial legs. Though up to eight inches in length, the creatures are seldom seen because they live mostly underground, eating insects and larvae, and may spend their lives within an area the size of a dining table. Most are discovered in moist areas when people overturn logs or rocks.

For the past 15 years, Papenfuss and Parham have scoured the state for new species, suspecting that the fairly common California legless lizard (Anniella pulchra), the only legless lizard in the U.S. West, had at least some relatives. They discovered one new species – yellow-bellied like its common cousin – under leaf litter in protected dunes west of Los Angeles International Airport. They named that species A. stebbinsi, because Stebbins grew up and developed an early interest in natural history in the nearby Santa Monica Mountains.

Three of the four new legless lizard species hail from the southern San Joaquin Valley.A. alexanderae is a silver-bellied species discovered near Fellows, in the oil fields around the city of Taft. The yellow-belliedA. campi occurs in three isolated arid canyons on the edge of the Mojave Desert just below and east of Walker Pass in the Sierra Nevada. The purple-bellied A. grinnelli was found in three vacant lots in downtown Bakersfield, though only one of those lots remains: the others have been bulldozed and developed.

Because many sandy, loamy areas, including dunes and desert areas, offer little cover for lizards if they emerge, Papenfuss distributed thousands of pieces of cardboard throughout the state in areas likely to host the lizard. He returned year after year to see if lizards were using the moist, cool areas under the cardboard as resting or hunting grounds.

This technique turned up three other new species in the Central Valley (see sidebar): A. alexanderae, named after Annie Alexander, who endowed the UC Berkeley museum in 1908 and added 20,000 specimens to its collections; A. campi after Charles Camp, because of his early-career discovery of the Mt. Lyell salamander in the Sierra; and A. grinnelli after Joseph Grinnell, who in 1912 first noted habitat destruction around Bakersfield from agriculture and oil drilling.

Interestingly, all these species had been collected before and were in collections around California, but when preserved in alcohol, the lizards lose their distinctive color and look identical. Papenfuss and Parham identified the species through genetic profiling, but they subsequently found ways to distinguish them from one another via belly color, number and arrangement of scales, and number of vertebrae. However, two species – the previously known common legless lizard of Northern California and the newly named southern species found at LAX and apparently broadly distributed south of the Tehachapi Mountains – remain indistinguishable except by genetic tests or, now, the location where they are found.

Papenfuss and Parham are working with the California Department of Fish and Wildlife (CDFW) to determine whether the lizards need protected status. Currently, the common legless lizard is listed by the state as a species of special concern. Distribution of the five species of legless lizard in California. A. pulchra was already known from a wide range in the central part of the state, but four others are newly described by UC Berkeley & Cal State-Fullerton herpetologists. Courtesy of Breviora.

“These species definitely warrant attention, but we need to do a lot more surveys in California before we can know whether they need higher listing,” Parham said.

Papenfuss noted that two of the species are within the range of the blunt-nosed leopard lizard, which is listed as an endangered species by both the federal and state governments.

“On one hand, there are fewer legless lizards than leopard lizards, so maybe these two new species should be given special protection,” he said. “On the other hand, there may be ways to protect their habitat without establishing legal status. They don’t need a lot of habitat, so as long as we have some protected sites, they are probably OK.”

Papenfuss says they are not yet in danger of going extinct, since he has found some of the lizards in protected reserves operated by the CDFW, the U.S. Bureau of Land Management and a private water reserve outside Bakersfield, in addition to the El Segundo Dunes near LAX.

The crew of Shirra and Stafford (both USNA grads, although Stafford took a commission in USAF) are shown in the attached photo flashing Gemini 7, crewed by Jim Lovell (USNA)  and Frank Borman (USMA) on their approach in '65-shortly after the Army-Navy game. (Played that year to a 7-7 tie.)  Obviously, Borman was outnumbered. 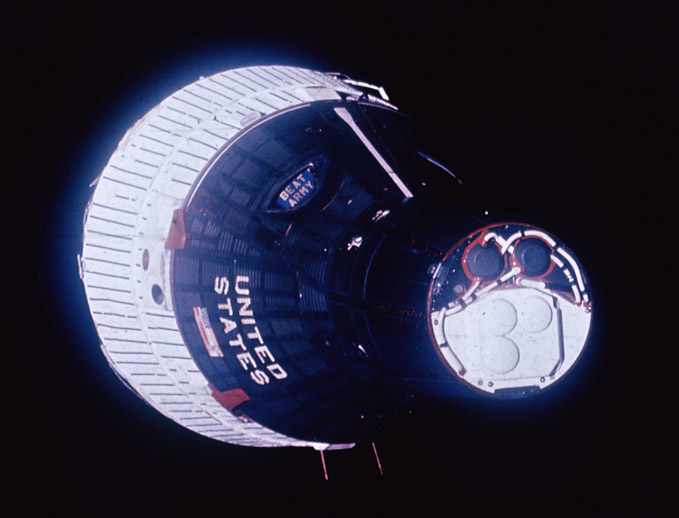 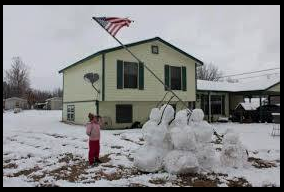