A sieve in general is intended to find the numbers which are remainders when a set of numbers are divided by a second set. Generally, they are used in finding solutions of diophantine equations or to factor numbers. A Lehmer sieve will signal that such solutions are found in a variety of ways depending on the particular construction.

The first Lehmer sieve in 1926 was made using bicycle chains of varying length, with rods at appropriate points in the chains. As the chains turned, the rods would close electrical switches, and when all the switches were closed simultaneously, creating a complete electrical circuit, a solution had been found. Lehmer sieves were very fast, in one particular case factoring 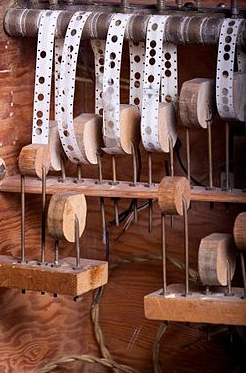 In the 1930s or thereabouts he was reluctantly going to a fellow professor's house for a cocktail party, to celebrate the return from China of the man's wife.  She greeted him at the door and said "You mathematicians count things, right?  Tell me something about this!" and handed him one of those insanely complicated wooden Chinese puzzles you take apart but probably will never get back together again.

He said, twirling the thing around in his hands, "Well, if you count the number of corners, and subtract all the edges, and then add the faces, you get...let's see now...you get 2!"

"Nobody can count that fast!" she said.  "I assure you it is true, madam" he replied.  She went off in a corner with some tape and a pencil.  Fifteen minutes later she said, in an astonished voice, "It's true!"

He never let on, of course.