·
Updated August 8, 2020
WW2 enthusiast
Did the Japanese people know how bad the war was going for them in 1945?
YES
First, the obtuse claim in one answer here which is that the Japanese public in general was not aware how bad the war was going against them is blatantly wrong. That claim is based on the fact that widespread censorship during the war kept most Japanese in the dark about the course of the war.
While it was true that Japanese commoners were lied to, misled by the Japanese government and its propaganda machinery, they were wise enough to be able to deduce correctly that the war was deteriorating through other clues.
Food Crisis
The first clue was the deteriorating food situation. Anticipating a protracted war with the Anglo-American powers, the Japanese government controlled by militarists enforced rationing of all sorts of materials deemed vital for the war effort such as rubber, metals, oil, and especially foods. These materials were stockpiled and reserved for the military. In 1940, rice was added to the growing list of rationed commodities. Because rice was a staple of Japanese daily diet, many Japanese became profoundly unhappy with this situation. In addition, the government instituted a new law which dictated all families to fast one day every month.
The food shortage degenerated into the food crisis as the war deteriorated. American submarines sank millions of tons of Japanese merchant ships which deprived Japanese commoners of foods taken from occupied territories in addition to raw materials needed for factories in the Home Islands. The USAAF conducted aerial mine-laying campaign in the Inland Sea

The aerial mine-laying campaign was extremely effective in destroying Japanese shipping and hindering maritime activities which disrupted the transportation of foods and other raw materials between the 4 main islands of Japan.
The food crisis brought about widespread malnutrition and illness among the civilian population. In August 1944, a factory reported that 30% of women and boys in its workforce were afflicted by beriberi induced by malnutrition. This in turn resulted in absenteeism as workers were more concerned with finding foods for their families than going to work. Daily calories intake for Japanese was 1,900 in 1944, then 1,680 in 1945 compared to 2,000 calories/day before the Pacific War broke out. The food crisis only worsened and was encapsulated by a diary entry of Admiral Matome Ugaki

Observing a slice of funny little fish and two vegetables leaves which constitute a ration allowance. I contemplated the hardships of those who prepare a daily meal instead of the complains of those who eat it.

By comparison, daily calories intake for the British was never below 2,800; and daily calories intake for an American soldier in combat duty was > 3,000.
Increasingly tormented by hunger and deprivations, millions of Japanese commoners - including the most gullible and least educated - could appreciate the rapid deterioration of the war. Their thoughts must have been along the line of “If the war was going well for Japan, then why were we suffering from deprivations? Why were we getting less and less foods?”
Devastation of the Homeland
Following the loss of the strategically important Marianas Islands to US force, the USAAF had a forward base for the new powerful long-range Boeing B-29 Superfortress. Starting since October 1944, B-29s based in the Marianas began mounting strategic bombing campaign against the Japanese Home Islands. Initially, the strategic bombing campaign yielded disappointing result due to numerous problems: poor accuracy of high-altitude bombing, adverse weather conditions (esp jet streams) over Japan, and the unreliability of the B-29s engines.
However, when General Curtis LeMay was appointed commander of the B-29 force in the Marianas, the situation improved rapidly. Highly technically competent, determined and aggressive, LeMay subjected the B-29 crews to intense training to improve bombing accuracy using both visual sighting and radar. The ground crews worked relentlessly to improve the reliability of the the engines.
Another drastic act implemented by LeMay was the tactic of low-medium-altitude bombing at night. Exploiting the fact that Japanese AA defense plus night fighters were ineffective, LeMay ordered the removal of all defensive armament from B-29s which would allow them to carry more bombs. Most importantly, all B-29s would carry napalm bomb to destroy housing made of paper in densely populated Japanese urban areas. The die was cast for one of the most devastating bombing raids in history: Bombing of Tokyo (10 March 1945).
The raid was a complete success. LeMay’s bold and unorthodox tactic paid off handsomely. The B-29 force suffered light losses in return for the devastation inflicted on Tokyo. A large swath of the capital was incinerated. An estimate of > 100,000 people were killed. 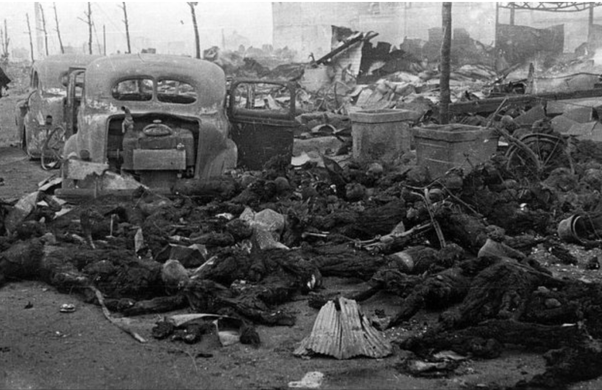 The aftermath of the incendiary bombing raid on 9th-10th March 1945: Charred corpses of Japanese civilians. 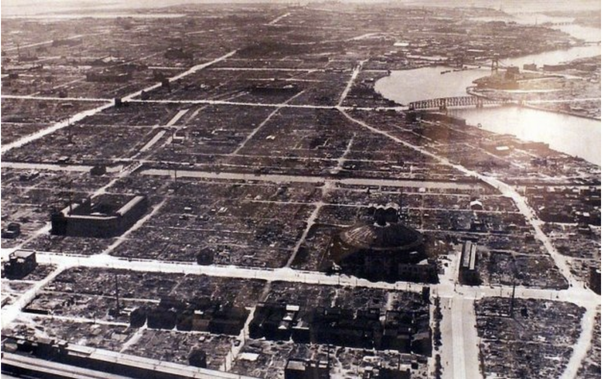 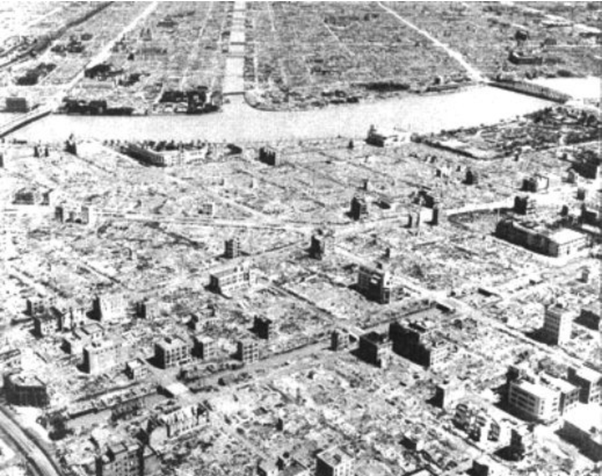 Hiroshima? Nope, this was a section of Tokyo obliterated by low-altitude incendiary attack of XXI Bomber Force 9th-10th March 1945.
Soon other Japanese cities suffered the same fate: Yokohama, Kobe, Osaka. etc…
The raid shocked the people who survived these raids. The devastation was so horrific and complete that no one could fail to be impressed. Apart from air raids, the US Navy bombarded coastal regions of Japanese by the big guns of battleships and by carrier-aircraft.
The fact that the Americans were able to destroy the sacred soil of the Home Islands with near impunity and the failure of the military to repel the enemy engendered deep-seated anger among Japanese commoners. They criticized the government for the inability to provide adequate protection for its citizens during air raids. The military was accused of incompetence for the failure to defend the Home Islands against the intruders.
Growing Social Unrest, Resentment and War Weariness
Despite the numerous claims of the Japanese propaganda machinery about the unity of the Yamato-race, the reality was much different. Even before the Pacific War, Japan was torn internally by pervasive poverty, class division and hierarchy, resentment between the rich and the poor, between the commoners and political establishment and the military. All of these problems were only exacerbated as the war deteriorated in 1944, 1945.
While commoners endured hunger on a regular basis, the rich and members of the military continued to eat properly. The tightening of food rationing only deepened the resentment between civilians and the military.
While the poor were conscripted and sent to the battlefield, the rich and the well-connected evaded conscription. Rumors of corruption or special privileges for the wealthy always provoked anger among the poor.
While the police arrested and punished ordinary citizens who engaged in illegal trading of commodities in the black markets, they turned a blind eye to or protected offenders in their ranks and in the military.
Restaurants were closed ostensibly due to food shortages but were reopened as military clubs patronized by military officers who ate and drank heartily in the company of geisha. Policemen and military servicemen took foods in stores without paying.
Resentment extended even to the Imperial Households, including Emperor Hirohito. By late 1944, there were reports of defamation directed at the Emperor who were referred to as baka (fool), bakayaro (stupid fool), bocchan (spoiled child). Signs of defeatism emerged as anti-war and anti-military statements, letters and wall-writing proliferated. Unsigned letters were sent to politicians urging them to end the war as soon as possible to end all suffering of the commoners. Those letters conveyed similar statements such as:

Please stop this war as soon as possible
Japan will lose this war for certain
Aren’t you aware of how difficult the lives of the Japanese people have become?

The situation got so bad that the government had to introduce a new law called Peace Preservation Law to punish and suppress defeatism.
Deprivations and social resentment resulted in the rupture of traditional values and social order in a shame-based society whose people prided themselves on honor. Petty theft became rampant. Handbags and briefcases were stolen on crowded trains. Shoes left at the entrances of houses and restaurants were stolen. Hungry people snuck through windows in the kitchens to steal foods. Children in cities were found to live in sheds and lived off scraps of foods from other houses. A young girl in Niigata was disillusioned by these behaviors, remarking:

I became disillusioned with the disgraceful qualities in our people. They had become a herd whose humanity had been shorn from them by war.

Furthermore, starting since 1944, millions of Japanese in cities started to see through the lies of their government. Most tellingly was their dubious reaction to officials claims of victories and slogans. For example, after the loss of Saipan, the government issued contradictory and bewildering statements claiming that Imperial forces had won a great victory in the Marianas Islands. Newspaper issued hollow and bombastic slogans such as “The Fighting Will of 100 million Seethes” or “The Establishment of an Impenetrable Defense Cordon and Total Tenacity” (you can see how fond the Japanese were of exaggerated and dramatic statements)
Those slogans and official statements failed to mislead ordinary Japanese. Recognizing the facts that Saipan was relatively close to the Home Island and that it was home to a sizeable Japanese population, they reasoned that if the Americans were able to invade it, then the government’s ludicrous claims of victories could not have been true. It followed that Saipan must have fallen into American hand. Aiko Takahashi wrote in her diary 18th July 1944 that Japan had obviously suffered another crushing defeat and she did not give credence to the claim that the Marianas were conceded to lure the enemy closer to the Home Islands where they would be annihilated. Many other Japanese shared her Takahashi’s view. But fearing arrest by the authority, they could only keep those opinions to themselves or confide them only to people they trusted.
Conclusion
Japanese people weren’t completely gullible and brainwashed as many people have believed. They were human beings after all; and as humans, they had all the primal needs for food and other emotional and physical comforts. The negative effects arising from the deteriorating war affected their needs in the most conspicuous ways. Suffering from hunger on a regular basis, losing their homes and fellow people in air attacks, they clearly appreciated that the war was going badly for their country. Resentful of their incompetent leaders, the military, the police, and the wealthy, they were war-weary and sincerely wished for a swift end to the war so that they could be delivered from their suffering.